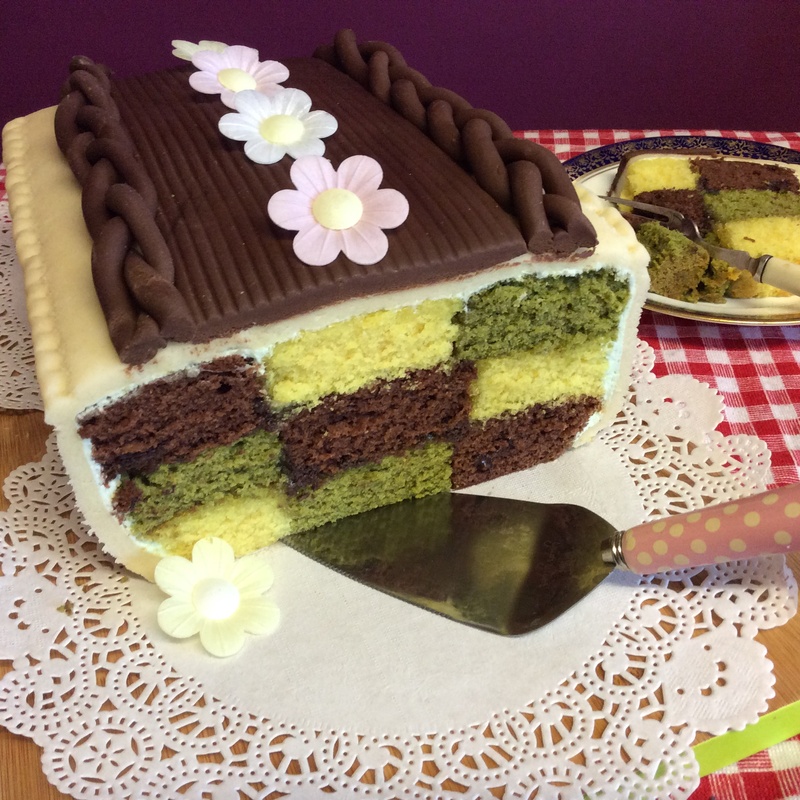 In 1884 princess Victoria, the granddaughter of Queen Victoria married Prince Louis of Battenberg in Germany and a myth was born, the Battenberg cake…. It was said that the English bakers tried to emulate the skill of their German counterparts with their skills in modelling with marzipan and decorating cakes and created this tea time classic, shame it is probably just a story, as there is no historical evidence to back it up. There are recipes for this cake under several other names including a domino cake, a Neapolitan cake and here in the North of England a Chapel or Church window cake.

All of the original recipes called for pink and white coloured cake in either 4 or 9 panels, sandwiched with strawberry jam and covered in marzipan but I have kicked this little ‘bad boy’ into the 21st century by changing the colours and adding a third flavour. Moist green tea and almond infused sponge nestles perfectly beside zesty lemon and rich, dark chocolate chip cakes and I have decorated them in the traditional marzipan, funky chocolate flavoured fondant and pretty edible sugar flowers.

This is a BIG cake and I would serve it for parties of thirty people or more, it’s really impressive and although there are lots of individual elements to it, it is not a difficult cake to make.serves 20-30

For the butter cream

100g butter, softened but not runny

300g of soft chocolate flavoured fondant (I bought mine from Sainsbury’s, but if you can’t find it then knead some cocoa powder into plain white fondant.

For the stock syrup

Preheat the oven to 180c or 160c for a fan assisted oven and grease and line three 30cm x 20cm tins. Place a shallow tin of boiling water in the base of the oven, this creates steam which helps the cakes rise evenly.

Cream the margarine and sugar in a large bowl until pale, soft and fluffy then beat in the eggs one at a time, finally fold in the flour

Divide the mixture equally between three bowls and add the green tea powder and almond essence to one bowl, pour into a ready prepared tin and smooth the surface.

In the second bowl add the vanilla essence, cocoa powder and plain chocolate drops, pour into a prepared tin and smooth the surface.

In the third bowl add the lemon essence and yellow food colouring and spoon into the last prepared tin.

Bake the cakes in the preheated oven for 30-35 minutes or until the cakes are well risen, firm to the touch and will spring back when pushed gently with your little finger.

Leave to cool in the tins.

Meanwhile make the sugar syrup by placing the caster sugar and water into a small saucepan and boiling it over a high heat for a few minutes then divide the slightly thickened syrup into three small bowls and add the lemon essence and juice to one bowl, the coffee liquid to the second bowl and the green tea powder and almond essence to the third.

Slice each cake lengthwise into three equal pieces and place one of each colour on your serving plate or board. Spread a little apricot jam on each cut surface then place another three pieces of cake on top, alternating the colours. Jam the cut surfaces again then stick the final three pieces of cake on top, once again ensuring that you alternate the flavours. Trim the sides and ends of the cake to make a neat shape.

Beat the butter, icing sugar and vanilla essence together until light and fluffy, add a little milk if necessary to make a spreadable consistency then smooth over the long sides and top (but not the short ends). Chill the fridge for 30 minutes if possible to make covering with the marzipan layer a little easier

Roll out the marzipan ½ - ¾ cm thick using a little icing sugar to prevent it from sticking, trim and cover the cake (not the open ends where you can see the window effect of the cake. Crimp the long edges if you have a set of cake decorating crimpers.

Divide the chocolate fondant into two and roll one piece into a long thin strip ¾ cm thick to fit on the top, trim and score with the back of a fork to make a pretty pattern then stick on top of the marzipan with a little cooled boiling water. Add the trimmings to the remaining chocolate flavoured fondant and divide into 6 equal sized balls. Roll each ball into a long thin sausage about the thickness of a pea and plait three pieces together (twice) to make the plaited rope effect for the top. If you can’t manage this, don’t worry, the cake looks equally impressive and pretty with small balls formed out of the chocolate fondant and lined up on the top or just do a simple, single rope effect and mark it with a fork at an angle. Stick the rope or balls on top with a little boiled and cooled water and then place the edible wafer or sugar flowers down the centre of the cake….stand back and admire your gorgeous cake!

Categories: something a little bit special..., Cutting cakes, A blast from the past.... old fashioned recipes with a modern twist!