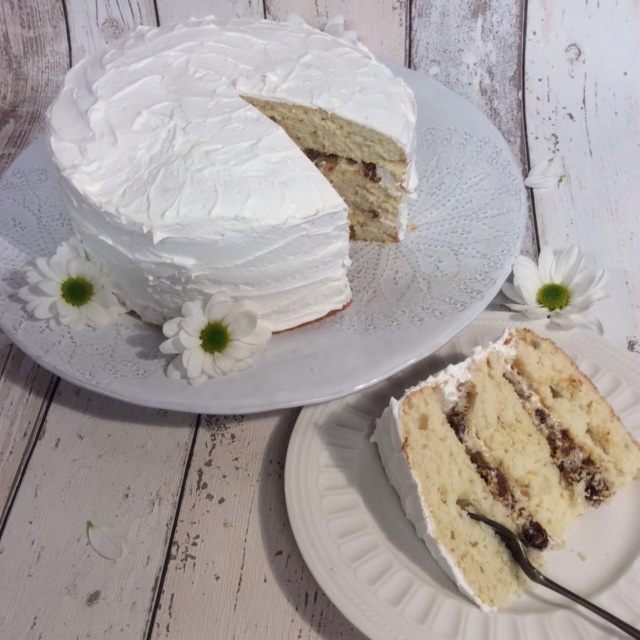 Lady Baltimore cake is a good, old fashioned slice of Southern hospitality on a plate and although it might involve a few different stages it is well worth the extra effort and time involved to make this Dense, white cake with its rich, moist filling of figs, raisins and Bourbon beneath a pure white frosting of Italian meringue... get yourself onto that veranda with a Mint julep and a big fat slice of delicious Lady Baltimore cake y'all.....

50mls Bourbon, or Brandy or orange juice if you want to go alcohol free

Preheat the oven to 180c or 160c for a fan assisted oven then line and grease 3 x 8” round, shallow baking tins with circles of baking paper or parchment.

Now prepare your ingredients in stages.

1) Sieve the flour, baking powder and salt into a small bowl and set aside.

3) Place the butter, Trex and caster sugar into a large bowl and beat for 5 minutes or until the mixture is pale and fluffy

4) Place the egg whites into a clean bowl and whisk until they stand up in firm peaks.

Once your bowls are all ready you can start to combine the mixture by adding half of the flour mixture into the butter mixture, and beat until combined. Follow this with half of the milk and vanilla mix, beat again until just combined. Now repeat with the remaining flour followed by the milk. Once the flour and milk have both been added fold in a third of the whisked egg whites (use a large metal spoon) to loosen and soften the mixture then carefully and gently fold in the remainder using a figure of 8 movement to keep as much of the trapped air in the mixture as possible.

Divide the mixture between the three prepared tins and smooth and level the surface. Place the prepared tins in the preheated oven and bake for 25-32 minutes or until golden brown, firm to the touch and a thin bladed knife or skewer comes out cleanly when inserted in the centre. Remove from the oven and leave to cool in the tins for 10 minutes before removing to a wire rack and leaving to cool completely.

Whilst the cakes are baking and cooling prepare the filling and frosting. Place the finely chopped raisins, figs and broken pecans into a small bowl and drizzle over the Bourbon and finely grated orange zest, leave to marinate for 20 minutes then beat into the softened butter.

Now prepare the frosting by placing the granulated sugar, liquid glucose and 150mls water into a large non stick saucepan and place the pan over a low heat, stirring gently to dissolve the sugar then remove the spoon and turn the heat to high to bring the mixture to a rapid boil, cook until the mixture reaches 245F (soft ball stage). Whilst the sugar is boiling and reaching temperature whisk the egg whites in a large clean bowl until they reach soft peak stage.

Once the sugar syrup reaches 245F pour the mixture onto the egg whites in a thin stream, whisking all the time until the mixture thickens and cools (this could take 10 minutes)

Add ¼ of the frosting into the fruit, butter and nut mixture and use this to sandwich the three layers of sponge together then spread the remaining frosting over the sides and top of the cake.